Where would the LP be today if it were not for Rap? There are audiophiles who would say the ‘revival’ of vinyl was inevitable. I can’t imagine how a small number of audio wackos (I include myself in the wacko category) could ever make enough of an impact on the market or public awareness to lift the LP from its grave. It was sunk by the end of the 1980s, left to the backroom remainder bins of record stores and weekend flea markets. As digital has done to all sorts of other technologies, and professions, it revolutionized the production and listening to recorded music. The only exception were diehard a’philes who never accepted CDs, on the grounds that the earliest releases were not consistently the sparkling, gobsmacking, head-spinning auditory marvels the marketing departments of the big record companies had promised. (Nor were they the horrid, ear-bleeding, ruinous reversals of fidelity as a’philes claimed.) The slim, sleek, savvy CD swept away the crackly, bulky, heavy plate of plastic that had to be handle with kid gloves, kept immaculately free of dust, away from heat, stored upright—never stacked, and played with the finest, costliest equipment to get reasonably good sound. Ordinary DJs quickly gave up LPs for the lightweight convenience of CDs. Not only are CDs smaller and easier to carry from gig to gig, they take more abuse and don’t wear out—they sound as good on the first play as the thousandth play.

But there were the other DJs that did more than just play cuts. These guys created a show. They made their own mixes, and more than that, they invented a new form of performance. These were the Hip-Hop DJs. Control over multiple turntables, live mixing, blending, scratching, cutting, transitions, and more, were essential to their art. In the early days of digital, it couldn’t be done with CDs. Even today, you don’t get the same kind of live, hands-on control using digital that you get with LPs. This alone kept an underground demand for LPs, and the medium in eyesight of a younger generation. However, with millions of LPs still lingering in basements and clearance bins, the demand was easily supplied. Something else had to happen. 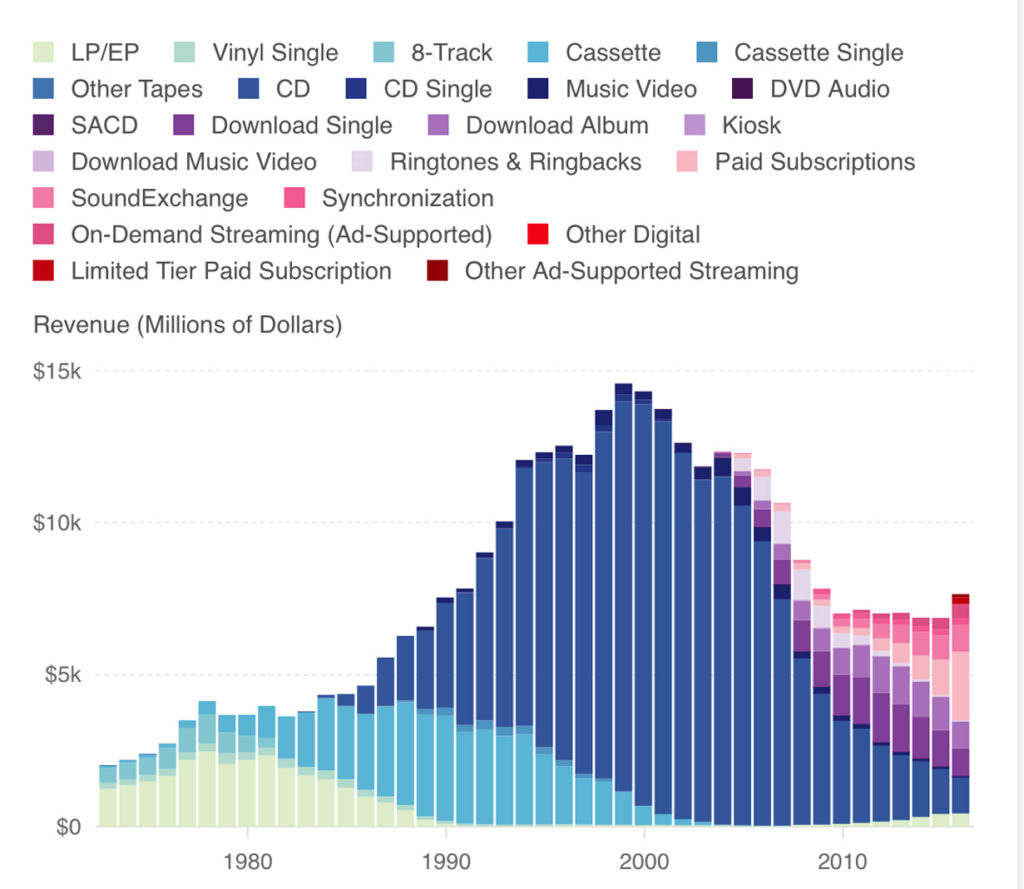 LP sales were dropping since before the commercial release of CDs. (October 1982 in Japan, March 1983 US & Europe.) Yup, 1979 signal the first year of LP sales declines. After a slight bump in 1980-81, the decline continued until hitting rock bottom a short eleven years later in 1993 when LP sales represented just a smidge over 0.1% of total music sales—that’s a penny out of every $10 spent. After twenty-four years in the dumps, the LP was nearly ready for a museum exhibit. Then in 2006, sales started to miraculously jump. A decade later, inflation adjust sales in 2016 hit the highest level since 1989. That’s certainly sounds impressive, until you look at the charts. By 1989, the LP was already only 3% of total music sales. In 2016 LPs were still under 5% of sales, and only that high because total music sales were about half what they were at their peak in 1999. Yup, another factoid to ponder. Music sales have dropped almost 50%, and if adjusted for inflation, down almost to a third of the 1999 peak level.

So, even if the LP is a niche market, and Hip-Hop DJs still prefer spinning vinyl, and a’philes still appreciate the vinyl “sound,” what really triggered the LP’s uptick?

Today there is an entire generation that has grown up on digital music. Vinyl is a novelty to them. No doubt, the physical hands-on property of vinyl is attractive. The tactile quality; the big cover jacket with artwork that doesn’t require magnification to appreciate; the anticipation of the needle drop; and the sound, oh yeah, that special sound of diamond grinding away at the soft, pliant, shiny black vinyl spinning round-n-round. There’s nothing quite like it, just like there’s nothing quite like grainy silver based photographic film. It is special. I cut my music listening teeth on it. I started my first collection of recordings with it. I got interested in audio while it was in its heyday. I get a twang of reminiscence from it. It has roots for me. Is it better? Positively not—and neither is film. (And I have even stronger sentimental sympathies for silver-based photography.)

I’m still scratching my head over vinyl’s comeback. Hip-Hop DJs, a’philes, nostalgia, novelty—none of these alone satisfactorily answers the question. It may simply be one of those mysteries of human crowd behavior. Taking into consideration the worldwide popularity of Rap and the rise of DJs, perhaps that has saved vinyl. But from a purely commercial view point, it doesn’t fly. It takes more than that to explain the current sales figures. The only explanation I can see is that Rappers and DJs set an example, and diehard a’philes kept preaching the word of vinyl. If you keep seeing something over and over; if a message is repeated, repeated, eventually it sticks. Then popular traction takes over without a second thought on anyone’s part. FOMO strikes again.

Review [Everything Is Oblivious]

This entry was posted in Audio, Discover and tagged audio, audio myths, better than good audio, fear of missing out, FOMO, LPs, vinyl. Bookmark the permalink.